Basics of the Middle Eastern Tambourine

Yousif Sheronick guides you from the basics of holding the Riq all the way through playing and embellishing traditional Middle Eastern Rhythms in both Cabaret and Soft positions. Included are technique exercises to develop your tones and build your strength.  The accompanying book, which you can download, includes a comprehensive collection of over 50 Middle Eastern Rhythms (many with multiple embellishments).

You can purchase this online course with a one-time payment.  No monthly fee is charged.  The course is accessible for 1 year after enrollment.  You can download the book and keep it forever.

**This course contains the same material as Yousif's previously published Riq Instructional DVD and Book.  You will not receive the physical DVD and Book when you purchase this course.  It is for online streaming only.

Be the first to review this course. 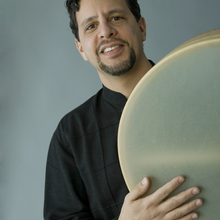 Yousif Sheronick has performed around the globe to critical acclaim, genre hopping with leading artists in the classical, world, jazz and rock music arenas. The New York Times hails Yousif for his “dazzling improvisations” and his “wizardry on a range of humble frame drums”. Of Lebanese descent, Yousif was recently featured in Drum! Magazine highlighting his versatility in an article titled “At The Corner Of The World”.

In demand as an educator, Yousif teaches private lessons and classes at his home in New York and has conducted residencies and master classes at top universities including Manhattan School of Music, University of Michigan, University of Kentucky, the Queensland Conservatorium and National University in Australia.

A major force in bringing world percussion into contemporary/classical music, Yousif has had the luxury of working with composers Evan Ziporyn, Derek Bermel, Kenji Bunch, Lev “Ljova” Zhurbin and John Patitucci, all of whom were eager to compose for his exotic instruments.

As a composer and arranger Yousif has contributed several solo and ensemble works resulting in performances of his music around the world. He has arranged several parts for his collaboration with the Lark Quartet including John Adams’ “Book of Alleged Dances” which was released on Bridge Records. His producing credits include a solo CD and two instructional DVDs. “A testimony to his genius” raves Modern Drummer Magazine about Yousif’s CD Silk Thread, and Rhythm Magazine (UK) says Yousif’s Riq Instructional DVD “is a must to uncover the mysteries of this ancient instrument.” He has appeared throughout North and South America, Europe, Middle East, Asia and Australia.

We suggest moving this party over to a full size window.
You'll enjoy it way more.
Close
Go Fullscreen